My Life as a Medarbeider (Co-worker)

So what is my typical day at Jøssåsen like? Well, that depends on the day of the week. My days vary from day to day, but not so much from week to week so I'll go through my typical week with you.

6:30 am
Fjøs. My day starts off in the stable. Yes, I wake up to the smell of cow poop! And I clean it up before milking. Everyone seems to think that I'll get used to the smell, but I hope that day will never come when I find cow poop aromatic. 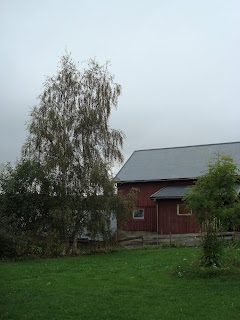 Outside of the stable.

The wash cloths hanging dry after washing the cows. 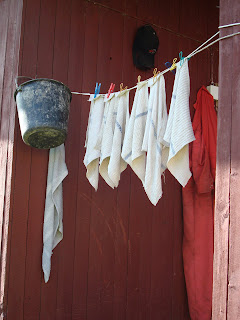 7:30 am
Frokost. Breakfast is served! I usually have about 5-10 minutes after milking the cows to get ready for breakfast. I'm quite lucky that I live in a house with 3 very abled-villagers,* "A," "B," and "T." "T" usually makes breakfast each morning. When breakfast is ready and the time is 7:30, she rings the cow bell by the kitchen to let everyone know that breakfast is being served. "T" has learned from observation what foods I like and dislike, and she kindly places the foods I like near my place at the table. I find that sweet and thoughtful and truly appreciate it.

* For confidentiality reasons, I will not be able to call the villagers by their name in the blog. Rather, for sake of clarity, I have assigned each villager a letter or letters.

9:45 am
Verksted. Morning workshop begins. On Monday mornings, I cook "middag," which is the biggest meal of the day, for our family in Nergården. I cook with "C," who is the best sous-chef anyone could wish for. Cooking is also the time that I try out my elementary Norwegian. I could probably name all foods and utensils in Norwegian! Woo-hoo!!!

10:30 am
Kaffepause. Coffee break for everyone in the village. We gather in Yggdrasil salen or hall for half an hour of break. It's a good time to greet those you don't work or live with. And in great Camphill tradition, it's also the place to gossip. Yes, there's a lot of gossip going on.

2:45 pm
Verksted. Afternoon workshop begins, and get this! I'm the søppeldame or the trash/rubbish lady. Yup! I know some of you may be laughing and thinking at the irony of it, and believe me, if I could, I would change it in a heartbeat. I would much rather be in the pottery instead, but I won't get into that... The drama that I created when I initially asked for some small changes have scarred me for life! So for now, I'm part of the søppel crew with "SA" & "ST." If I had my say, I wouldn't be part of this crew, but I enjoy the company of "SA" & "ST," and they make the workshop bearable. "SA" and "ST" are one of the sweetest couples you'll meet. "ST" knows a bit of English, and she is always teaching me something in Norwegian, sometimes even making me read to her an old magazine cover in the trash. She's a great teacher, and she always makes me smile.

4:30 pm
Fjøs. It's time to milk again! In the afternoon, "B" from my house usually goes and gathers the cows from the fields and gets them to the stable so that we can milk. "B" is a sweet old man, and he was usually the one to take over milking Lucia when I was learning to milk. He still does take over for me when I am being a weakling. 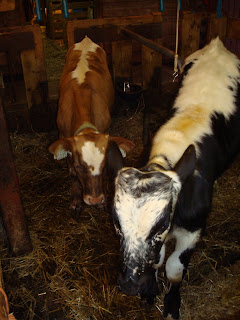 The bulls in the stable don't get names. I didn't think that was fair so I named the two youngest bulls: Schatzi and Brownie. No, they aren't very masculine names, but they are so cute!!!

6:00 pm
Kveldsmat. Dinner is served! Dinner is light. Very similar to breakfast. In fact, I would go as far as saying that they are, in fact, the same. We eat the same foods for breakfast and dinner. I will one day blog about Norwegian food. Just wait!

7:00 pm
Kor. Every other Monday, choir is held by one of the villager's father. Choir has not begun since I've been here, and it's rumored to start soon. In the mean time, all the co-workers attend a seminar on basic care of the villagers--how to help them brush their teeth, shower, etc.

8:00 pm
Medarbeider Møte. Co-workers meeting is where all the co-workers, old and new, gather to discuss different issues about the community. It is usually very long and drawn out, unnecessarily. Decisions are made through painfully long voting processes where no one can really decide either because people don't care enough or are afraid to voice their opinions. I am not a fan of meetings. Never have been and probably never will be.

My day off! Woohoo! Until just recently, I had the whole day off, but now new co-workers, who can't speak Norwegian, have Norwegian lessons from 11am to 1pm. It's only 2 hours long, and I really want to learn Norwegian, and I'm extremely thankful that it's being offered to us, but I still wish I could have the whole day off. Oh yes, for wishful thinking.... 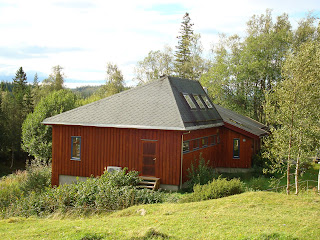 Wednesday is probably one of my favorite work days since I work in 2 of my favorite workshops held in the building above: vevstua--weavery in the morning and keramik--pottery in the afternoon. We weave and knit amazing things in the weavery. You wouldn't believe how fast the villagers can knit. I can't even knit that fast! And the things that come out of the weavery are amazing. Take a look! 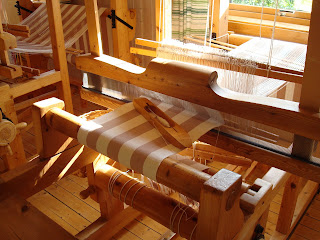 Aren't these hats great?!? We use a technique in which we knit the hats super big and shrink them to the right size by washing. The end result is felted-looking hats like below. 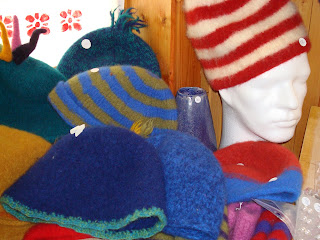 Pottery is probably my favorite because I get to work with my hands and get them dirty! I love working with clay, and I wish that I could be in the pottery more often, but for now, I'm thankful that I even have it at all. The things that we produce in the pottery are beautiful. 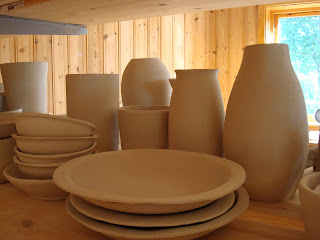 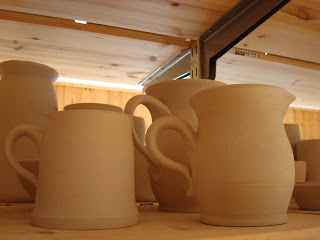 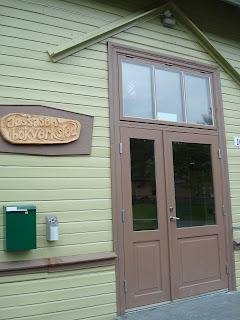 Thurday is the day that I go to Hommelvik to the bokverksted, the book workshop (above). At our book workshop, we make books for all the Steiner schools in Norway plus some others, which I think is pretty damn amazing. Even I use one of our books for my Norwegian class. 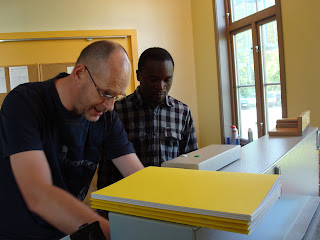 Jan is showing Emmanuel, one of the final stages of book-making: cutting three edges to perfection. I am packing the finished books into packs of 25 (above). It's like wrapping presents! See the end product (below). 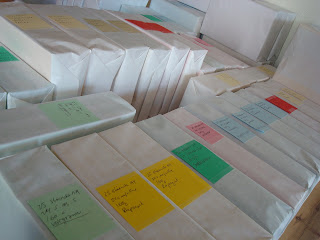 5:30 pm
Svømming. Some of the villagers go swimming at the public pool in Hommelvik. I have not been to the pool yet, which is excellent, since I have developed a fear for public pools after studying public health and working at the CDC. Pools are pretty gross. But I do think it'd be fun to see the villagers swimming so I may make it there--just not swim.

7:30 pm
Kafeteria. On Thursday evenings after swimming, we don't have the usual supper in the houses. Instead, one of the houses holds cafeteria in the hall. (Since the hall is under construction, we are temporarily holding it at each respective houses.) The idea of cafeteria is to raise money to donate to non-profit organizations of our choice. Each dinner and a drink costs around NK 25-35, which is about $5-7 (because of our outrageously low $$$). Yes, it's true; Scandinavians do know how to give. If only everyone were so giving.... 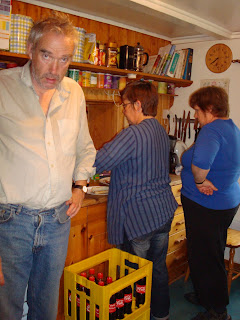 Nergården was the first house to hold the cafeteria this year. This is our kitchen (above). Anne bought some delicious hot dogs from our cafeteria and is enjoying the complementary ketchup(below). 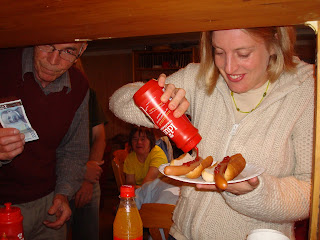 I, too, enjoy my hotdog at our first kafeteria of the year. Yum! 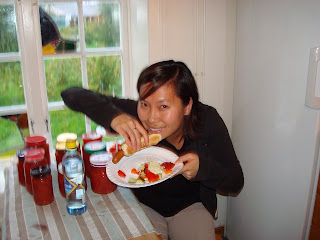 TGIF? Hmmm, kind of. Morning workshops are held as usual, but Friday is our cleaning day. Yup! We spend our Fridays cleaning so that everything will be nice and clean for the weekend. Not so much a fan of cleaning so needless to say, it's not my favorite day of the week, but I'm quite lucky than most co-workers since "A" and "T" do most of the cleaning in our house. Yes, I must admit, I'm being a bit spoiled. Just a wee bit.

2:30 pm
Jøssåsen møte. This is where all the villagers and co-workers get together to talk about what's going on in the village. Anyone and everyone who has a point they'd like to raise are encouraged to bring it up at this meeting. Since my Norwegian is not up to par, these meetings are quite lost to me.

7:00 pm
Huskveld eller Film. Friday evenings are usually spent in the houses. Sometimes if it is suggested during the Jøssåsen møte, we all gather in the hall to watch a movie.

Saturday is a pretty relaxed day. No workshops and no cleaning. If it weren't for milking, I could get up fairly late to have breakfast as late as 11am! But no such luck, milking starts at 7:30 am on weekends.

On Saturdays, you can do pretty much anything. I've done a lot of different things on my Saturdays, including picking berries, exploring the land around Jøssåsen, mushroom hunting, as well as experimenting in cheese-making.

After supper on your own, bible evening starts at 8pm. Everyone puts on their "Saturday" best and gathers to discuss different topics, whether it be mosquitos in Norway or the war in Iraq, and even talk about a passage from the bible. It's pretty interesting even if you aren't religious.

8:30 am
Frokost. Breakfast on Sunday mornings is special. We have twice as many spreads on the table and we eat them with "T"'s homebaked buns or rundstykke, which are delicious.

10:00 am
Handling. Anthroposophical service is held on Sunday mornings. I've been to the same type of service at CBD. Services are not required for anyone to attend, and I haven't been to one yet. As soon as my Norwegian improves, I'll go and check it out. Really, I will. Below is a picture of the hall where the service is held. 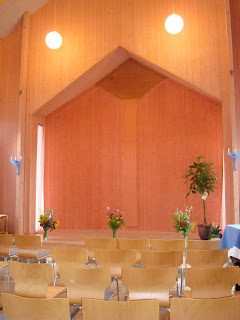 The rest of Sunday can be spent in various ways, attending concerts or plays in Trondheim--basically doing cultural activities. We haven't done much on Sundays yet, but I have cooked Sunday dinners, which are meant to be special. I'd much rather do a cultural thing in the city than cook, and I'm eager to go see an opera with our house. Perhaps La Boheme in November.

Well, that about wraps up my life in Jøssåsen!
Posted by jiyeon on Tuesday, September 02, 2008

This all sounds a lot like CBD to me - before everything got a bit watered out. Great blog - by the way. And excellent pictures. Hope to see you soon!
Hugs Ane (posing as Zsolt)

Thanks for giving us a look into your daily life!