Blogging takes up a lot of time, which I didn't realize at the time when I committed to share my adventures... which is why I have neglected to post anything in a while. So much is happening so fast that once I got a little behind, it was difficult to decide what to blog and when. But after a couple of emails from friends asking about the status of my blog, I, now, have re-newed energy and inspiration to go at it again. Some of the posts are long-overdue, even revisiting my holidays.... and Trollkirka in the Western Fjords. 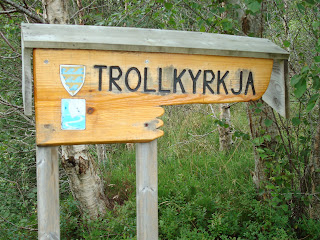 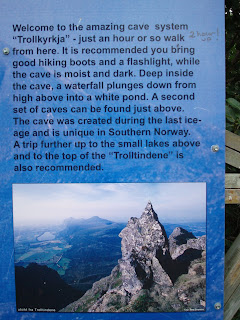 During our "vacation" in the Western Fjords, Anne and I did an incredible hike to Trollkyrkja, "Troll's Church." When we embarked on our hike, we weren't sure how long the hike would take. Why? you may ask. Well, according to Anne's German guide book, the hike takes 4-5 hours. My Lonely Planet estimates it would take about 2-3 hours whereas a Norwegian book simply says it would take about an hour and a half. So we had a range of 1-6 hours. Hmmmm.... Curious, isn't it? Even the sign at the start of the trail wasn't terribly helpful in the time department. As you can see (to the right), the sign says it takes "just an hour or so" to get to the caves, but someone, who presumably has done the hike, disagreed, and inked in "2 hrs up!" As Anne and I set out on our hike, we had a little challenge, to determine which country's guide has the most accurate information on hiking Trollkirka. 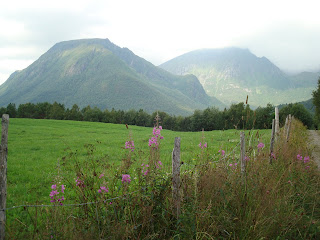 At the start of the trail, it looked as if it would take a very, very long time to get to the caves and the waterfall, especially if they were on top of one of the mountains we saw ahead. 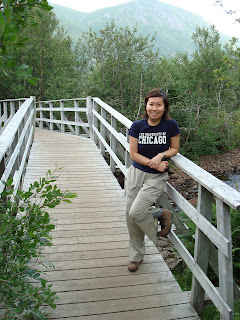 We weren't too concerned, however, about the length of the trip. We were happy to be out and about and to see something magnificent. We wanted to enjoy our hike and to explore the surroundings and to eventually reach the waterfalls in Southern Norway's longest cave, formed during the Ice Ages. (Plus, it wouldn't hurt to test out which guide book gives the most accurate hiking time. A little friendly competition among different nations. And I was so certain my Lonely Planet was probably the most accurate!) 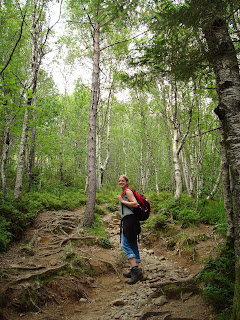 Anne and I stopped a lot along the rocky path to take pictures and to take in the beauty of our surroundings. The trail was as magical as the caves that awaited us at the top of the mountain. We couldn't stop awing and wowing. Everything was so green and so beautiful. And the air... it was so light and fresh. I kept breathing in, deeply, for my lungs to enjoy all the fresh cool air (that and maybe I also got a little out of breath since I wasn't used to hiking such steep trails.) I really wish my pictures could capture all the things I felt as I hiked to Trollkirka and the surprise as I saw the entrance to Trollkirka. It was so dark and ominous--not really what I had imagined, but maybe it was fitting for trolls. 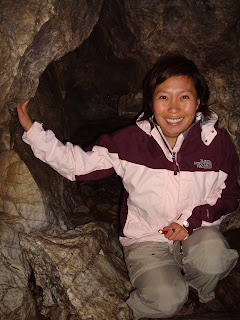 Anne had her headlight, but all I had was my little maglite, which is the size of my pinky. See the maglite in my hand in the picture? There wasn't enough light to luminate our way. The cave was damp, dark, and scary, as if a troll or an inbred-trolly-being might jump out at us, at any moment, like in that terrible and scary movie called the Descent. (If you haven't seen it, don't!) We were so scared that we didn't start making our way in until a brave Dutch man made his way, solo, into the cave, ahead of us. Frightened and cold, we basically crawled to get to our destination in the dark.


And what a destination it was! Angel-white marble carved by the water was so sculptural and beautiful. It was nothing like I had ever seen or imagined. 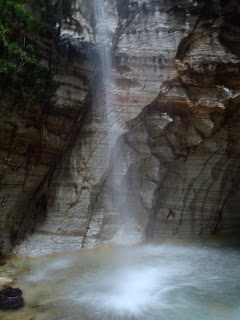 And as if the first cave and the waterfall and the light at the end weren't amazing enough, what we saw in the second cave was doubly astonishing. Indescribably so.... 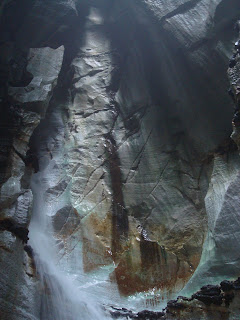 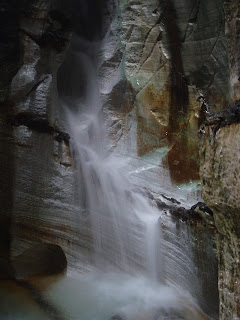 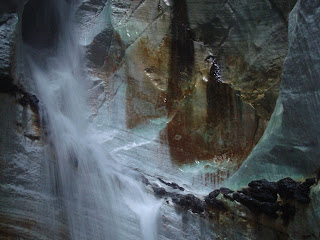 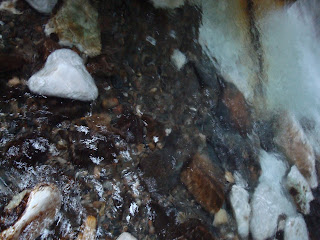 It may seem silly, but I kept thinking as I admired these caves and waterfalls that nature is the greatest architect/ sculptor. I am so happy that I was able to see something as amazing as Trollkirka. I heart Norway. See the heart in the picture? That stone was sculpted and left there just for me to see. I'm sure. ;)


Oh, yeah, I almost forgot... if you're curious, our trip to and fro Trollkirka took longer than what any of our guide books described: 6+ hours. The accuracy challenge still stands.
Posted by jiyeon on Thursday, August 07, 2008